Since version 4.0 the name suffix OSE became obsolete. All non-GPL parts are now packed in an additional extension pack available from Oracle.

Packages for VirtualBox are not officially available in stable releases of Debian, due to lack of cooperation from upstream on security support for older releases. See 794466

However, new versions of VirtualBox are made available to stable users on a "rolling" basis by Debian Fast Track, a Debian project. This is currently available for Debian 10 and 11.

Oracle packages VirtualBox for a number of Linux distributions themselves, including Debian. These are completely unsupported by Debian, but you may find them interesting if you need a new version faster than Fast Track provides, or wish to stick close to upstream.

Installing the Guest Additions on a Debian VM

This section documents installing the Guest Additions on a VirtualBox virtual machine with Debian, not a host system running VirtualBox.

If you want the Guest Additions ISO for your host, see the virtualbox-guest-additions-iso package, which is available in the "non-free" archive area on all Debian versions.

For Sid, the Guest Additions are available in the "contrib" section of Debian, only for the amd64 architecture. They can be installed as such:

2. Mount the Guest Additions ISO and copy VBoxLinuxAdditions.run from the ISO's location to your home folder.

3. Open a terminal and execute the following commands to install the guest additions:

4. Reboot the system and the VirtualBox Guest Additions should be installed!

Packages for VirtualBox's Guest Additions are not officially available in stable releases of Debian, due to lack of cooperation from upstream on security support for older releases. See 794466

However, new versions of the Guest Additions (along with the rest of VirtualBox) are made available to stable users on a "rolling" basis by Debian Fast Track, a Debian project. This is currently available for Debian 10 and 11.

You can start VirtualBox in Headless mode using VBoxHeadless like this:

You should run this inside a screen instance and detach the screen after starting the VM with Ctrl+a d. At least in version 4.0.x you won't need to use screen. Just start the vm with:

and a VBoxSVC process appears in the background. You can loggoff without problems.

The character device /dev/vboxdrv does not exist

When starting VirtualBox, the following message is shown:

If the module is not found, refer to Installation to provide a virtualbox-dkms* package to your system.

You are not a member of the "vboxusers" group

As stated by VirtualBox:

Add your user account to the vboxusers group via adduser(8), as described in Installation:

Reboot your system to apply the group membership change.

You receive the following message

VirtualBox works fine until you reboot the system. This is because "vboxdrv" is not loaded during system boot.
Solution.
Make sure that you actually have these packages in your system
1) dkms;
2) build-essential;
3) linux-headers-$(uname -r)

Then, append the following line to /etc/modules 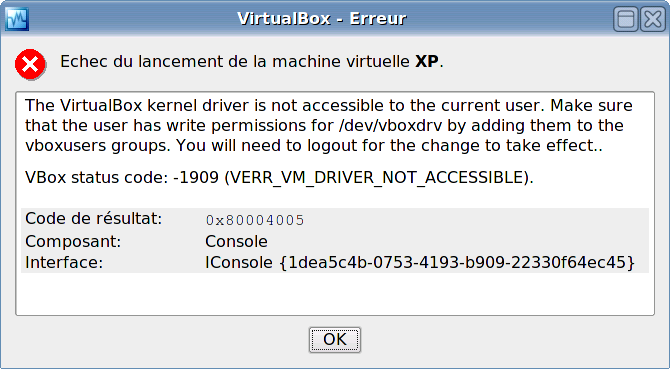 See You are not a member of the "vboxusers" group above.

RDP not working out of the box?

To get RDP working you need to install the VirtualBox Extensions Pack from the vendors website VirtualBox Downloads.

When installing VirtualBox, the following message is shown:

It is because Secure Boot is enable, you have to sign yourself the kernel modules to be able to load them.

See instructions to sign kernel modules with a Machine Owner Key at: https://wiki.debian.org/SecureBoot#MOK_-_Machine_Owner_Key

You can also deactivate the secure boot in your bios.

The normal way to switch consoles in Linux is to use the ctrl-alt-Fx key combination. This does not work for a VirtualBox virtual machine (VM); it will switch consoles for the host system instead.

You should use <Host Key>-Fx instead, where <Host Key> is the key defined in File->Preferences->Input.

This also works for ctrl-alt-del and ctrl-alt-backspace

This is documented in the VirtualBox user manual in the section "Keyboard and mouse support in virtual machines", subsection "Typing special characters".

(An alternative method to switch between text consoles is to use alt-left and alt-right, but that does not work for graphical consoles like XOrg or DirectFB.)