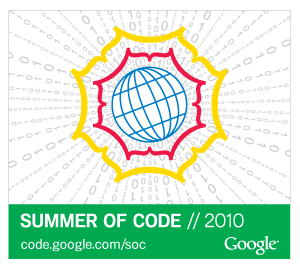 This wiki page will be the central point for information about the Google Summer of Code 2010 at Debian. Feel free to add missing sections to it.

The Google Summer of Code is a program where Google pays students stipends to work over the summer on free software projects such as Debian. Each student works with one or more mentors from the community to complete a software project.

The Google Summer of Code has started again this year. If we are selected as a mentoring organisation, 2010 will be the fifth participation of Debian in the program and we want to again improve on our participation to make the experience even more exciting and fulfilling this year for the students, the mentors and the whole Debian community.

Here are the next steps:

The full timeline is available here.

Qt GUI for aptitude. Currently, KDE users need to use Aptitude via the console interface, or install the newly developed GTK frontend, which does not fit well into KDE desktop. Making Qt frontend to Aptitude would solve this problem and bring an advanced and fully Debian-compliant graphical package manager to KDE.

When a package deliver configuration files, the problem of merging user data with new configuration instructions will arise during package upgrades on users systems. Sometimes merging can be done with 3 way merge, but this process does not insure that the resulting file is correct or even legal. This project intends to create standards, tools an heuristics to make the scary config file conflict resolution debconf prompt a thing of the past.

Currently debbugs supports a SOAP interface for querying Debian’s Bug Tracking System. Unfortunately this operation is read-only. This project would create an API for debbugs which supports sending and manipulating bug reports, without having to resort to email. This project does not intend to replace email as mean to manipulate the BTS but rather to enhance the BTS to allow other means of bug creation and manipulation.

The project paves a way to combine the demands in high performance computing with the dynamics of compute clouds with Debian. Combining the Eucalyptus cloud computing infrastructure with the TORQUE resource manager and preparing the components for dynamically added and removed instances provides the user with a attractive high performance computing environment. Such a system allows users to share resources with large compute centers with minimal changes in their workflow and scripts.

This project aims to improve the installation experience of Debian on handheld devices by replacing ad-hoc install scripts by a full-blown and adapted Debian-Installer. The Neo FreeRunner is used as it is the most convenient and open device from a development standpoint, but other devices will also be explored.

Hurd port and de-Linux-ization of Debian-Installer

The primary means of distributing the Hurd is through Debian GNU/Hurd. However, the installation CDs presently use an ancient, non-native installer. The goal of this project is to port the missing parts of Debian-Installer to Hurd. To achieve this, all problematic Linux-specific code in Debian-Installer will be replaced by less or non-kernel dependent code, paving the way for better support of other non-Linux ports of Debian.

Hardware like 64bit processors are perfectly able to execute 32bit opcode but until now this potentiality is disregard as the infrastructure tools like dpkg and APT are not able to install and/or solve dependencies across multiple architectures. The project therefore focuses on enabling APT to work out good solutions in a MultiArch aware environments without the need of hacky and partly working biarch packages currently in use.

Emdebian uses a filter to select packages from the main Debian repositories that are considered useful to embedded devices, excluding the majority of packages. The results of processing the filter are automated but maintaining the filter list is manual. This project seeks to automate certain elements of the filtering process to cope with specific conditions. This project will also generalize to more elaborate and intelligent algorithms to improve the transitions of the main Debian archives.

Making packages upload smarter, more interactive and painless for uploaders by switching from anonymous FTP and Cron jobs to a robust protocol and modern package checking and processing daemon. This daemon would test early and report early, saving developers time.

I am a student

You have until April 9, 12 noon PDT / 19:00 UTC to contact us and to apply on the Google Summer of Code application.

Familiarize yourself with the communication tools of Debian:

Join the communication channels of the teams or persons involved with the subject you would like to work on and discuss it. Don't be afraid to suggest seemingly crazy or vague ideas, we'll help you and give you suggestions. If you're lost (or even not!), drop in the communication channels of the Summer of Code team mentioned below. Remember that early preparation is a guarantee that your proposal will be better!

There is some interesting introductory documentation on this wiki about what Debian is and what Debian is for a developer. A lot of information about being a Summer of Code student can be found on the Advice for students page.

We also have a template that we would recommend students to use for their application: application template

I am a Debian developer

Your help is much needed from general organization to individual mentoring. Come see us on IRC or on the mailing-list mentioned below.

This year, we want to improve the communication between Summer of Code projects and the whole Debian community during the whole Summer of Code program, from student/project selection to final code integration into production through testing and feedback.

A lot of information can be found on the Advice for mentors page. A practical mentoring guide can be found here.

We're also on IRC: #debian-soc in the OFTC network (irc.debian.org). Just drop in and ask your questions. Of course you can also ask in other Debian IRC channels.

The Google's Summer of Code general IRC channel is #gsoc in Freenode.

Ubuntu is also participating in the Summer of Code this year.

The relationship between the projects means that many things which would improve Ubuntu would also improve Debian, and if you are interested in one then you may be interested in the other.

You can find information about their participation at http://wiki.ubuntu.com/GoogleSoC2010.

Please add yourself to the relevant tables, preserving alphabetical order of the last names. To get a 'linkid', register on the GSoC web application.

Organize the promotion of the Google Summer of Code 2010 at Debian here.

Flyers made for 2009 can be used as a template for 2010, and put on university bulletin boards, etc.