KiCad Suite is an Open Source Electronics Design Automation Suite for various platforms. It allows you to do the complete development process of creating schematics, BOM lists and finally design a PCB within one suite.

The Buster release was done with version 5.0.2+dfsg1-1, this version was superseded by upstream with a new minor version cycle to 5.1.x which is the first cycle with full GTK+3 support. As usual recent upstream versions get back ported to buster-backports, so also here please switch over to Buster Backports to get the most recent stable version.

The KiCad version that was prepared for that release was 5.1.9+dfsg1-1, various updates were done by the KiCad upstream developers since the release of Bullseye that are availabe through bullseye-backports.

Both archives will have most of the time the same versions of KiCad, this is in question the current stable release or one of the next stable release candidates (some times called RC). Due the rules for back porting new versions in Testing are also the source for Backports.

Recent KiCad versions do fully support GTK+3, but this is mainly depending on the cross GUI library libwxgtk3.0-gtk3-0v5. The first release of wxWidgets3.0 was in 2018 and will get updated to 3.2.x at one day, unfortunately the upstream developers of wxWidgets aren't doing any back ports of the current wxwidget development or bugfixes to the 3.0 stable series so also KiCad is depending on this version.

Due this circumstance you might hit some problem that is related to wxWidgets and the Wayland compositor. On the project website is a dedicated section for know issues you probably can find answers.

It's likely we will find more GTK2/GTK3 related issues with the current KiCad major version. The main reason for this the ongoing GTK3 transition within Debian testing and probably not fully for GTK3 ready source of wxWidget. If you can provide fixes for KiCad or wxWidgets the help would really appreciated by the KiCad developers!

KiCad is maintained in the PKG Electronics Teams, feel free to join the team and helping out by maintaining the KiCad related packages! If you can help out with the manuals for KiCad HowTo's please take a look into the upstream repositories on GitLab for kicad-doc. The translation for the documentation and the KiCad UI is done by Transifex. All Debian packaging trees around the KiCad suite are placed on Salsa in the subgroup KiCad.

The central git repositories used, are at https://salsa.debian.org/electronics-team/KiCad/

Due the heavy grown size especially for the 3D models the old src:kicad was split into more new source packages so we can update libraries and templates independently and also keep the binary packages within a acceptable size. The planning of the created new source packages was done to do a better collaboration with Jean-Samuel Reynaud who is doing the work for the Daily-Build PPA in Ubuntu. We wanted to get the same package layout within Debian and Ubuntu which is now reality.

Over the time the requirements about the needed binary packages have changed, currently there are four additional packages around the main kicad package that is providing the main applications.

There is one additional virtual package which will pull in all usual required library packages called kicad-libraries.

If ever possible there will be all packages provided for all supported Debian releases.

We made up a small graphic to visualize the various KiCad related package dependencies. It should help to clarify what binary packages exist and how they are in a relation to the main binary package kicad. 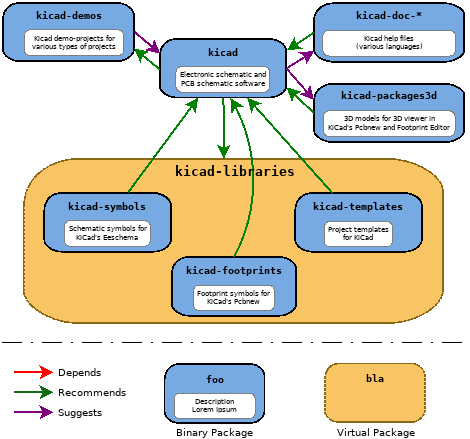 Upstream uses the term "Nightly" for different cases, there is a process of ongoing back porting of fixes and random new features into the current stable release cycle of KiCad. These changes will end in the next stable point releases. And there is the main development tree for the next major release (currently 7.0). But both development trees aren't fit into the way the Debian archives are intended.

The main goal of Debian beside providing free software is stability. The whole thing of the testing archive is to prepare the next stable release. By this nature it's not a advantage to upload constantly snapshots of KiCad into the archive. This means not that there will never be any development version provided, this is technically not that difficult, but this requires infrastructure outside the Debian archive and maintainers that are willing to do the work and act in case of questions or problems. If you want to step up please get in contact with the Electronic Team.