The Jetson TK1 developer kit from NVIDIA based is based on the Tegra K1 chip (also known as Tegra 124). The Tegra K1 (codenamed "Logan") features a quad-core 32-bit ARM Cortex-A15 CPU and Kepler GPU (GK20A) with 192 CUDA cores. The Jetson TK1 can run Debian's armhf port. 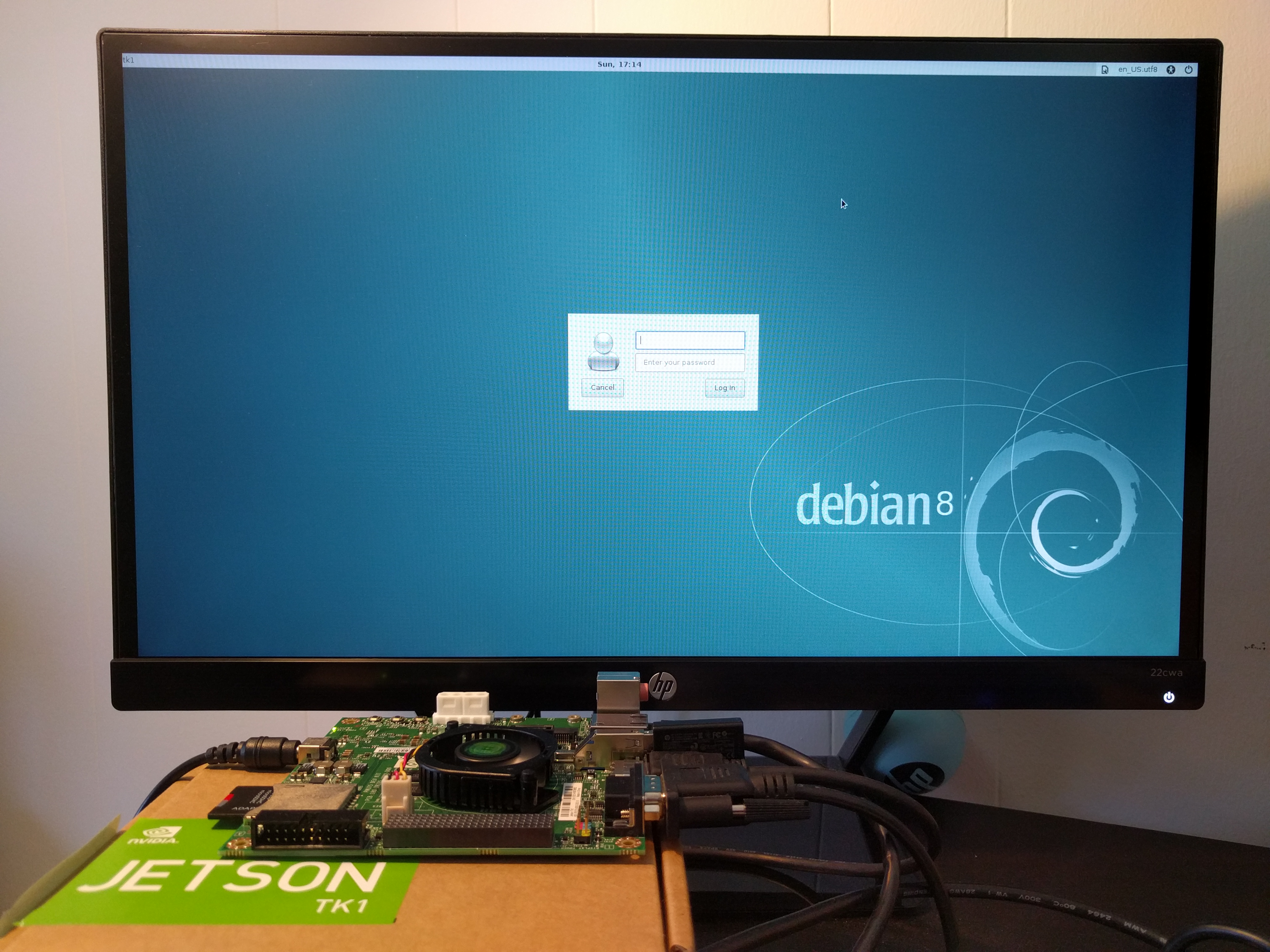 Parts of this procedure require changing U-Boot environment variables. To do that you need serial console access. The board has a standard serial port so a null modem cable works if you have serial on your machine. More usually a USB-serial adaptor is needed. Use screen or minicom to communicate. For example:

The board is set up with a 2-second pause during boot, where a character received on this console should interrupt the normal boot process and get you a U-Boot prompt.

You have to install mainline U-Boot as the boot loader in order to run Debian on your Jetson TK1 (debian-installer *may* work fine with the shipped u-boot, but booting will fail consistently (See #Known issues). Debian provides a precompiled U-Boot image.

In order to flash U-Boot to your Jetson, you have to put it in recovery mode:

Debian provides an U-Boot image for the Jetson TK1. In order to install U-Boot from Debian, please obtain the Linux For Tegra R19.3 driver package (Tegra124_Linux_R19.3.0_armhf.tbz2) from NVIDIA's developer site.

If you're running Debian stretch, you can install the Tegra U-Boot package on your host:

If you're on an older version of Debian, you can download the package and unpack it somewhere (dpkg -x u-boot-tegra*.deb tmp).

Now flash U-Boot to your Jetson:

(Change the location of the jetson-tk1 directory if you unpacked the package manually.)

You can use standard Debian installer from stretch to install Debian on your Jetson TK1 (tested with alpha7). Debian-installer from Debian stable (jessie, Debian 8) does not work because this board is not supported by that kernel.

You can choose between two installation media:

The netboot image consists of the installer. Packages are downloaded via the network.

If you want to install Debian to your SD disk, make sure to obtain the netboot image.

See the instructions for more details.

The existing U-Boot config doesn't specify the DTB filename or the console to use for output. You need to set those two things for the installer to work:

Now put the SD card into the Jetson and reset the board. It should just boot off the SD card. If not, you can do it manually:

or at lower level:

You can also use your monitor and keyboard instead of the serial console to install Debian. Load the daily installer onto your SD card and start the installer like this:

While the easiest way to load Debian installer is with an SD card, there are instructions below on loading the installer via Ethernet. 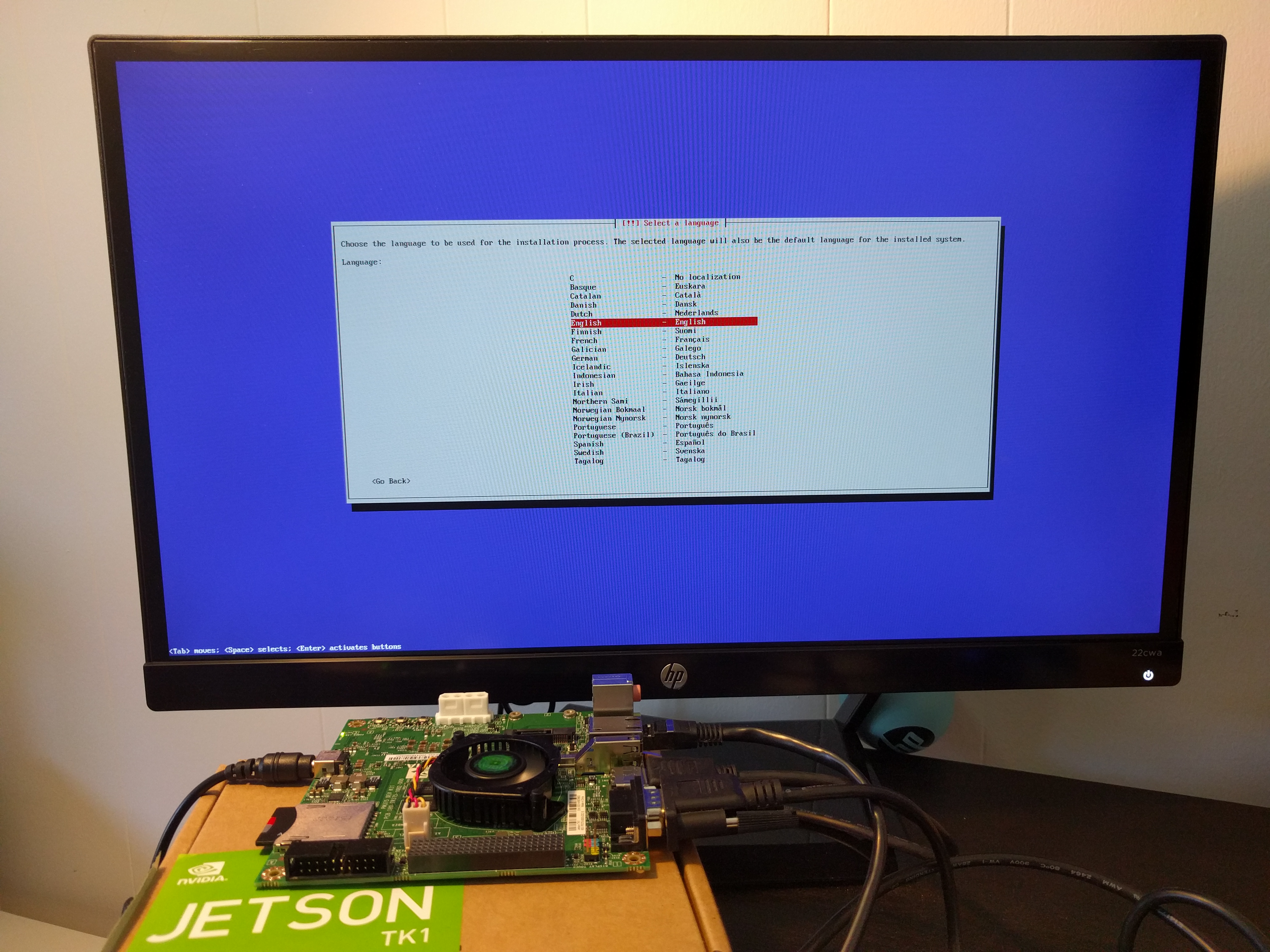 The installer will start and you can perform a normal installation. You can consult the installation guide for more information.

The installer will tell you that there is a missing firmware file (rtl_nic/rtl8168g-2.fw). You can safely ignore this warning and choose "no" (don't load additional firmware). The Ethernet will work fine without this firmware file.

You can install to the internal eMMC, the external SD card, or a SATA drive (or a USB stick, not covered here). The options are covered below, but the two recommended options are:

Please note that the IDs of the MMC/SD cards are reversed in U-Boot and Debian:

To install to the internal eMMC, choose the "manual" partition method instead of "guided". Look for the "APP" partition (normally /dev/mmcblk1p1) and choose that as your root device. It can be formatted with the EXT2 or EXT3 filesystem (EXT4 is not read properly by uboot so will not boot). Leave the other 7 partitions alone as they are used for things like storing the boot loader itself. Ignore the warning about not having selected a partition for swap and format the disk.

Even though the EXT4 filesystem is supposed to work it doesn't boot properly. EXT2 and EXT3 work OK. YMMV (see #Known Issues)

The board can boot directly from the eMMC device. After you finish your installation, remove the SD card, and Debian will boot from the internal flash. You can override this by putting in an external bootable SD card.

To install to the external SD, choose the guided partitioning method and select "MMC/SD card #1 (mmcblk0)" in the installer. Note that you have to use the netboot installer instead of the hd-media.

The U-Boot boot loader cannot boot directly off the SATA disk, so /boot has to be on flash (either internal or SD card). It is best to use the internal flash so it 'just works'. The large first partition is the one formatted as a real filesystem for this (the other 7 are raw space used for various things such as the boot loader itself).

So set up the disks with /boot on /dev/mmcblk1p1 formatted as EXT2 and / (root) on /dev/sda1 (or however you wish to set up your drive).

After completing the installation you have to tell U-Boot where the root partition is, so that it can tell the kernel (it would be nice if this was automatic).

End the installation, and reboot, removing the SD card. Hit a key to stop the boot to get a U-Boot prompt and set bootargs to point to whichever partition you used for root:

then reboot, and you should be done.

Running Debian on the Jetson TK1

The Jetson TK1 requires some non-free firmware files to operate fully. Please configure Debian's non-free repository in APT and install the firmware-misc-nonfree package. This is required for the operation of:

As described above, you can ignore the warnings about missing Realtek (rtl_nic) firmware files. You can install the firmware-realtek package to get rid of the warnings if you want.

NVIDIA ported the free nouveau driver to the Kepler GPU (GK20A) of the Tegra K1.

According to Alexandre Courbot from NVIDIA, "you need to patch X a bit for it to take advantage of Nouveau/GLamor (and also enable DRM_TEGRA_STAGING in the kernel and compile libdrm with --enable-tegra-experimental-api)".

Debian's kernel and the libdrm package have the required options enabled. However, the X patches are missing. This is work in progress.

By default the "tegra124-cpufreq" module is not loaded. This limits the system to running at 1/3 speed!

To enable cpufreq at boot time:

To enable it manually:

You can see that this has worked by looking in /proc/cpuinfo. The BogoMIPS value will increase from 24 to 80.

You can also load the installer via Ethernet. When you boot, you'll see:

You have to run:

Now you can load files via Ethernet. For example, you can load the installer via TFTP. Make sure to use the netboot image.

U-Boot needs a script (boot.scr) to boot. This will be installed to /boot by flash-kernel during the install process (the default script /etc/flash-kernel/bootscript/bootscr.uboot-generic is used). If for some reason you don't complete the install you need to do this step manually, by installing the flash-kernel package and running

The characteristic last console messages are:

(The issue is one of power management, nothing to do with sound).