FreedomBox can automatically install security updates. On the Update page of the System section in FreedomBox web interface you can turn on automatic updates. This feature is enabled by default and there is no manual action necessary. It is strongly recommended that you have this option enabled to keep your FreedomBox secure.

Updates are performed every day at night according to you local time zone. You can set the time zone with Date & Time. If you wish to shutdown FreedomBox every day after use, keep it running at night once a week or so to let the automatic updates happen. Alternatively, you can perform manual updates as described below.

Note that once the updates start, it may take a long time to complete. During automatic update process that runs every night or during manual update process, you will not be able to install apps from FreedomBox web interface. 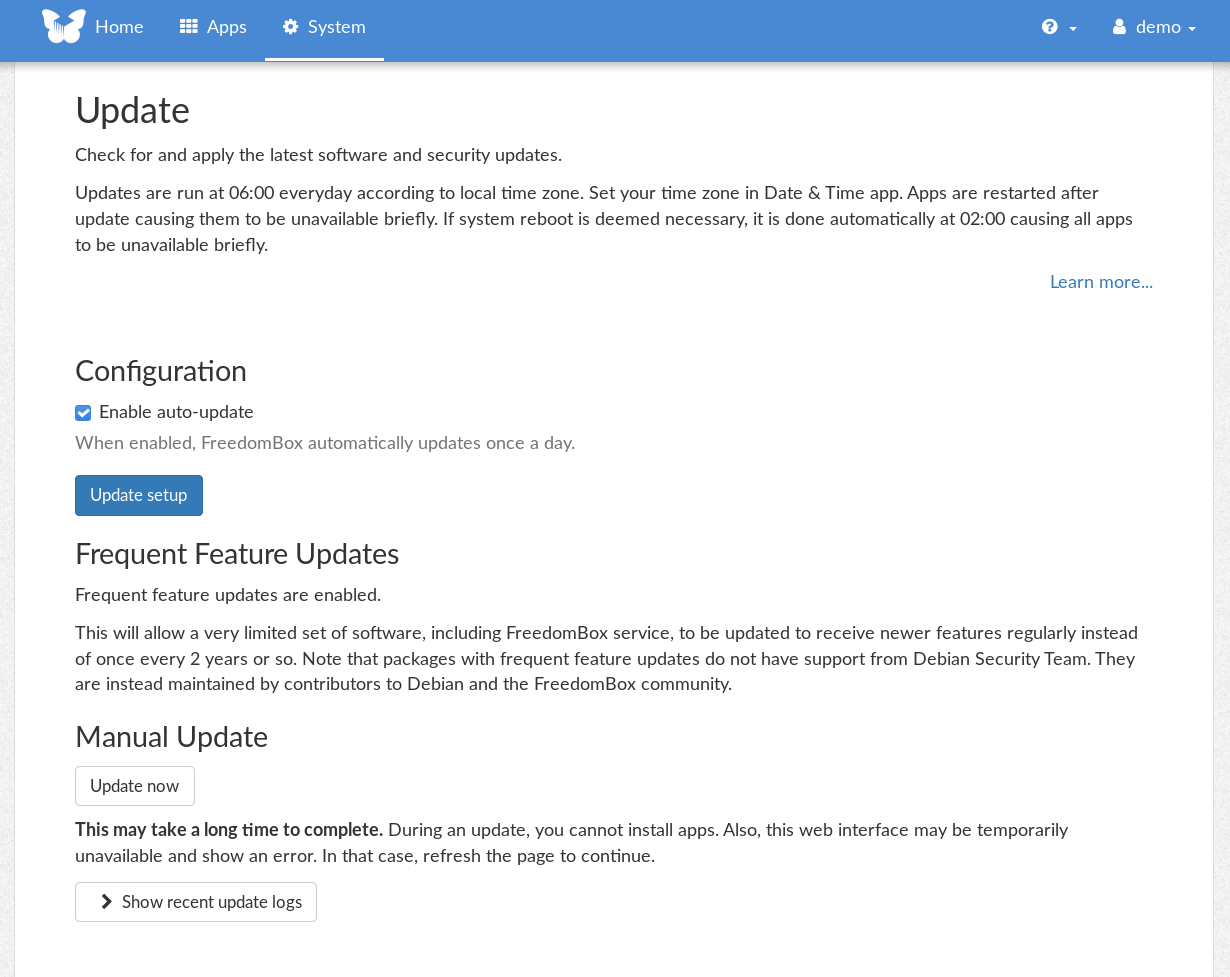 When Will I Get the Latest Features?

Although updates are done every day for security reasons, latest features of FreedomBox will not propagate to all the users. The following information should help you understand how new features become available to users.

Stable Users: This category of users include users who bought the FreedomBox Pioneer Edition, installed FreedomBox on a Debian stable distribution or users who downloaded the stable images from freedombox.org. As a general rule, only security updates to various packages are provided to these users. One exception to this rule is where FreedomBox service itself is updated when a release gains high confidence from developers. This means that latest FreedomBox features may become available to these users although not as quickly or frequently as testing users. If an app is available only in testing distribution but not in stable distribution, then that app will show up in the web interface but will not be installable by stable users. Some apps are also provided an exception to the rule of "security updates only" when the app is severely broken otherwise. Every two years, a major release of Debian stable happens with the latest versions of all the software packages and FreedomBox developers will attempt to upgrade these users to the new release without requiring manual intervention.

Testing Users: This category of users include users who installed FreedomBox on a Debian testing distribution or users who downloaded the testing images from freedombox.org. Users who use Debian testing are likely to face occasional disruption in the services and may even need manual intervention to fix the issue. As a general rule, these users receive all the latest features and security updates to all the installed packages. Every two weeks, a new version of FreedomBox is released with all the latest features and fixes. These releases will reach testing users approximately 2-3 days after the release.

Unstable Users: This category of users include users who installed FreedomBox on a Debian unstable distribution or users who downloaded the unstable images from freedombox.org. Users who use Debian unstable are likely to face occasional disruption in the services and may even need manual intervention to fix the issue. As a general rule, these users receive all the latest features to all the installed packages. Every two weeks, a new version of FreedomBox is released with all the latest features and fixes. Theses releases will reach unstable users on the day of the release. Only developers, testers and other contributors to the FreedomBox project should use the unstable distribution and end users and advised against using it.

To get updates immediately and not wait until the end of the day, you may want to trigger updates manually. You can do this by pressing the Update now button in Manual update tab for Update page in System section. Note that this step is not necessary if you have enabled Auto-updates as every night this operation is performed automatically.

When installing apps you may receive an error message such as

This is typically caused by shutting down FreedomBox while it is installing apps, while performing daily updates or during some other operations. This situation can be rectified immediately by running manual update.

Some software packages may require manual interaction for updating due to questions related to configuration. In such cases, FreedomBox updates itself and brings in new knowledge necessary to update the package by answering configuration questions. After updating itself, FreedomBox acts on behalf of the user and updates the packages by answering the questions. Until FreedomBox has a chance to update the package, such packages should not be be updated manually. The manual update triggered from the web interface is already mindful of such packages and does not update them.

In some rare situations, FreedomBox itself might fail to update or the update mechanism might fall into a situation that might need manual intervention from a terminal. To perform manual upgrades on the terminal, login into FreedomBox on a terminal (if you have monitor and keyboard connected), via a web terminal (using FreedomBox/Manual/Cockpit) or using a remote secure shell (see Secure Shell section). Then run the following commands:

If apt update asks for a confirmation to change Codename or other release information, confirm yes. If during update of freedombox package, if a question about overwriting configuration files is asked, answer to install new configuration files from the latest version of the package. This process will upgrade only packages that don't require configuration file questions (except for freedombox package). After this, let FreedomBox handle the upgrade of remaining packages. Be patient while new releases of FreedomBox are made to handle packages that require manual intervention.

If you want to go beyond the recommendation to upgrade all the packages on your FreedomBox and if you are really sure about handling the configuration changes for packages yourself, run the following command:

Auto-Update to Next Stable Release

FreedomBox can automatically update itself when there is a new stable release of Debian. This update feature is recommended, and enabled by default for stable systems. Note that it also requires "Enable auto-update" to be enabled, and that there is 5 GB free space on the root partition.

In some special cases, such as advanced customization made to the system, the automatic update could fail. If you wish, you can disable it on the System -> Update page, by clearing the “Enable auto-update to next stable release” checkbox.

If you decide to stay on an older release, you should check DebianReleases#Production_Releases to see how long it will be supported by Debian security team. Note that older releases will not have new versions of FreedomBox, even through backports.

Manual Update to Next Stable Release

Auto-update is recommended for most users. However if you want to do the update manually, here are some tips:

Back to Features introduction or manual pages.