This page will help you get started with using FreedomBox on a virtual machine using VirtualBox. While VirtualBox images are primarily used for testing and development, they can also be used for regular use if you have spare resources on one of your machines. This setup is useful if:

Prebuilt FreedomBox images for VirtualBox are routinely made available in VirtualBox's own VDI image file format. They contain a Debian GNU/Linux operating system and an installation of FreedomBox with all dependencies ready to run on any OS supported by VirtualBox (Windows, Linux, Macintosh, and Solaris).

A more adventurous alternative to downloading one of these images is to install Debian on VirtualBox and then install FreedomBox on it.

VirtualBox itself is available from https://www.virtualbox.org/ (or your distribution's package manager). 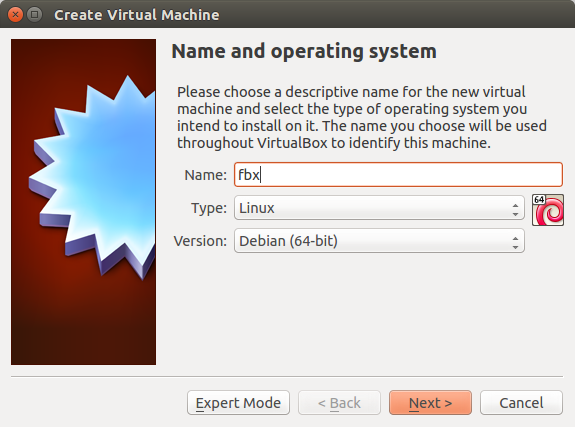 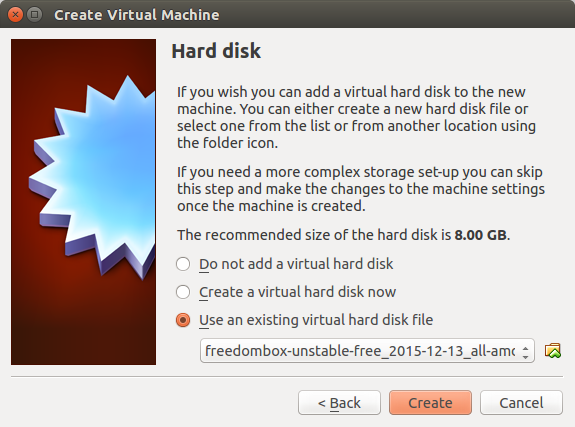 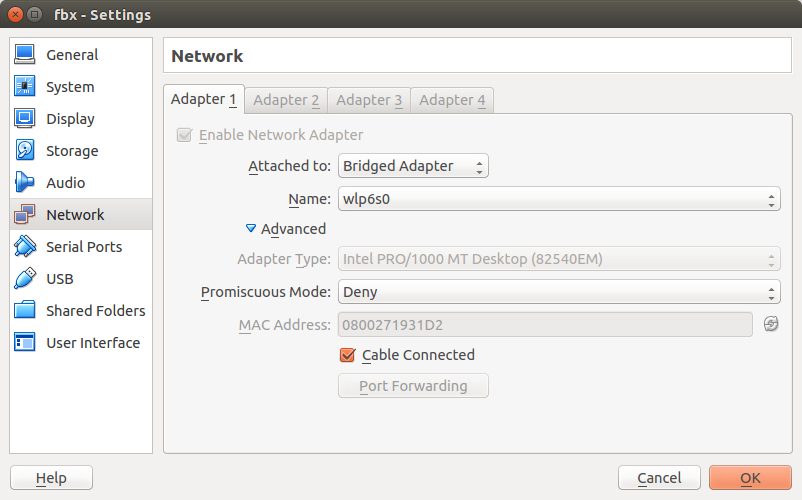 Note: It is important to make sure that you have provided the correct network interface in the above step. For example, if the virtual machine is running on a laptop connected to a Wi-Fi network, then the wireless interface (starts with wlp) must be chosen as shown in the screenshot.

When satisfied with the VM settings click the start button in the VirtualBox UI and your new FreedomBox will boot.

The console of the VM will show the textual screen below when finished booting, from here most interaction with FreedomBox will be through the web interface in a browser. 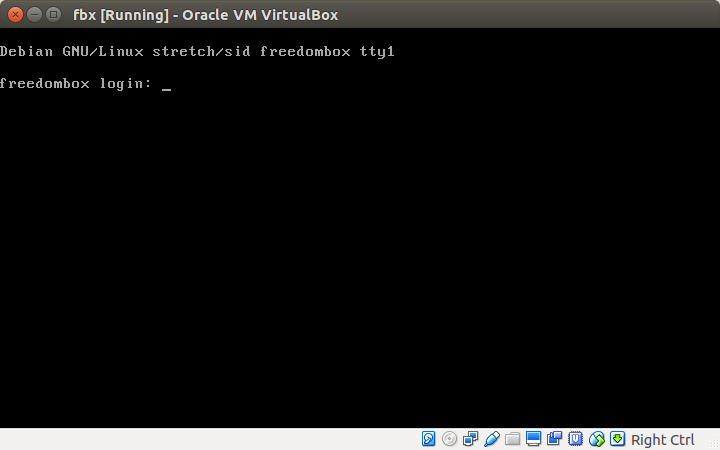 If everything went well so far, you should be able to access the web interface of FreedomBox by pointing a browser on the host machine to https://freedombox.local.

In case freedombox.local cannot be resolved, you need to find out your FreedomBox's IP address as described in Finding out the IP address of the virtual machine. Then access this IP from a web browser which is on the same network as the VM (for example, the host). If all is well, you are now presented with a welcome message and invited to complete the first boot process. 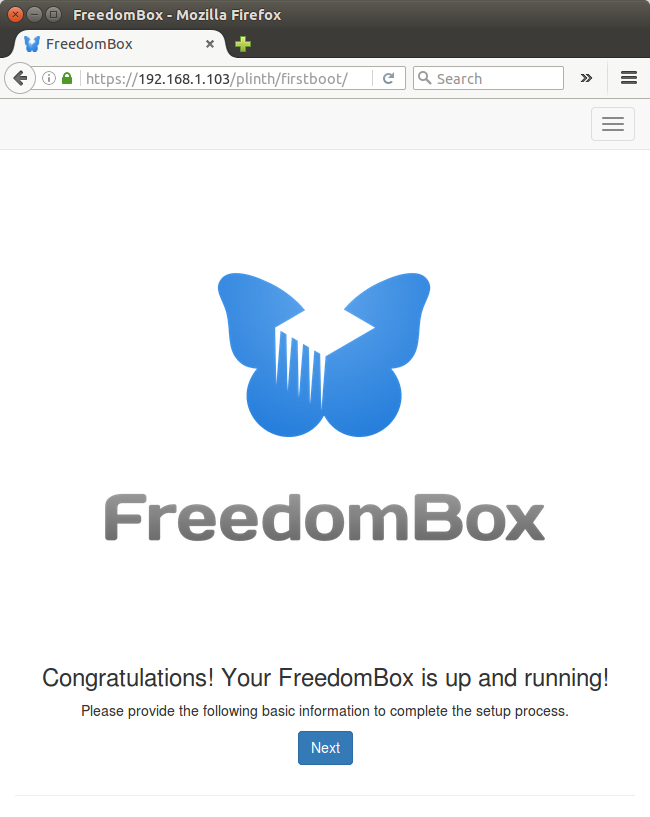 This mainly consist of creating an administrative user for the system.

You can log in to the Debian GNU/Linux system as the user created during FreedomBox first boot on the VirtualBox console or remotely via ssh.

After logging in, you can become root with the command sudo su.

If you wish to build your own images instead of downloading available images, it can be done using Freedom Maker.

VirtualBox provides many types of networking options. Each has its advantages and disadvantages. For more information about how various networking types work in VirtualBox, see VirtualBox's networking documentation. https://www.virtualbox.org/manual/ch06.html

For a simple setup, it is recommended that you use a single network interface in your guest machine. This will make the first boot script automatically configure that interface as an internal network with automatic network configuration. Inside the guest machine, the networking is configured automatically and all the services are made available on this network interface. For more information on how networks are configured by default in FreedomBox, see Networks section.

What remains is to make those services available to the host machine or to other machines in the network. You must then choose one of the following types of networking for the network interface on your guest machine. To set a particular type of network for the guest's network adapter, go to the guest VM's settings then the network options and then select the adapter you wish to configure. There, set the network type from the available list of networks.

6.2. Finding out the IP address of the virtual machine

This depends on the network configuration you chose. With a bridged adapter, your virtual machine gets its IP address from the DHCP server of your network, most likely of your Router. You can try the first couple of IP addresses or check your router web interface for a list of connected devices.

If you chose host-only adapter, the IP address is assigned by the DHCP server of your VirtualBox network. In the VirtualBox Manager, go to File -> Preferences -> Network -> Host-only Networks. You can see and edit the DHCP address range there, typically you get assigned addresses close to the Lower Address Bound.

Another possibility of finding the IP address is to login via the VirtualBox Manager (or similar software). The FreedomBox images do not have any default user accounts, so you need to set an initial user and password using the passwd-in-image script.

See also QuickStart for instructions on how to scan your network to discover the IP of the VM.

The package macchanger can cause network problems with VirtualBox. If you have a valid IP address on your guest's host network adapter (like 192.168.56.101) but are not able to ping or access the host (like 192.168.56.1), try uninstalling macchanger:

You might have to manually remove the script /etc/network/if-prep-up/macchanger. If Debian complains about unmet dependencies when you use a package manager (apt-get, aptitude, dpkg), try to remove 'macchanger' from the dependencies of 'freedombox-setup' in the file /var/lib/dpkg/status.

If you want to mount images locally, use the following to copy built images off the VirtualBox:

6.5. Fixing the time after suspend and resume

The virtual machine loses the correct time/date after suspending and resuming. One way to fix this is to create a cron-job that restarts the time service ntp. You can add a crontab entry as root to restart ntp every 15 minutes by typing 'crontab -e' and adding this line:

Do not restart this service too often as this increases the load of publicly and freely available NTP servers.

Whenever this happens VirtualBox shows following error message: Cannot register the hard disk A with UUID ... because a hard disk B with UUID ... already exists in the media registry

Creating several VMs from the same image causes collisions due to ID's (hostname, IP, UUID, etc) that are expected to be universally unique. Most can be handeled operating the running VM. But VirtualBox complains before that (at the very creation of the VM) about the hard disk's UUID. This is usual stuff when you develop/test e.g. FreedomBox.

You can change a clone's UUID in the terminal as follows: