?CoderGals Kosovo organized a hackathon for girls over the weekend of 18-20 August 2017. 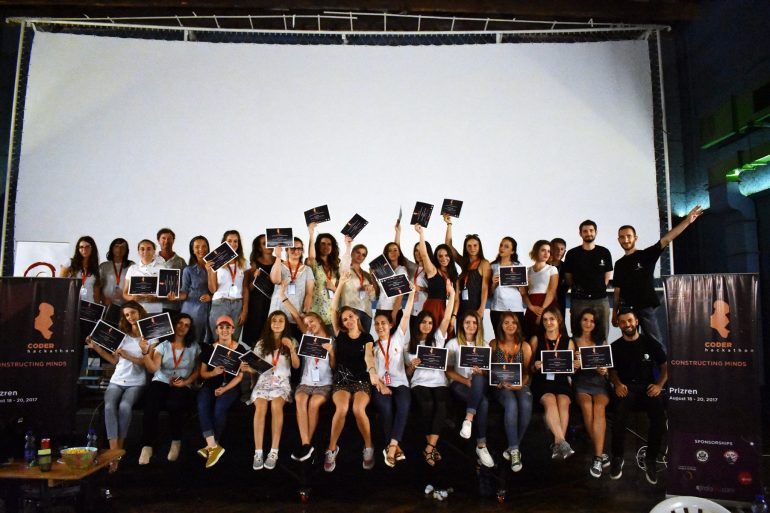 The event was made possible with a combination of financial assistance, gifts and volunteers from the US Embassy in Kosovo, Kosovo United States Alumni, The Cleveland Council on World Affairs, Gjirafa50.com, IPKO, Debian. A box of stickers was provided by FSFE (order them here for free).

Participants were given a list of small projects covering a range of skills including Python, web front-end and Android.

All participants were encouraged to collaborate through Github and share their work.

The task selected by this team involved choosing one of the music players in F-Droid and try to improve support for FLAC playback. They chose Vanilla Music and decided to try and fix some of the outstanding bugs, submitting a pull request

The team chose a task that involves creating a Python script (see this MIME handler discussion in bug tracker) for the tel: URI scheme, to display a ?PyQt popup window, study the number with libphonenumber and suggest further actions like dialing or adding it to the address book. tel: URIs can appear in web pages, the Telify plugin can create them from phone numbers on any web page, the GNOME Evolution address book and the Thunderbird address book (using TBDialOut plugin) can both create them too. Here is the project on Github

WebRTC with the Laraval framework for PHP

The team chose to follow the integration guide for JSCommunicator and integrate it with Laravel. Shejza Berisha published the code on Github

The team chose to follow the integration guide for JSCommunicator and try to apply it to the WPCall project started in GSoC 2016. They published their work on Github

The team chose to work on a script to scrape exchange rates from public web sites. They selected the Python Scrapy framework to help them and they stored the rates to MongoDB. Their code is published on Github