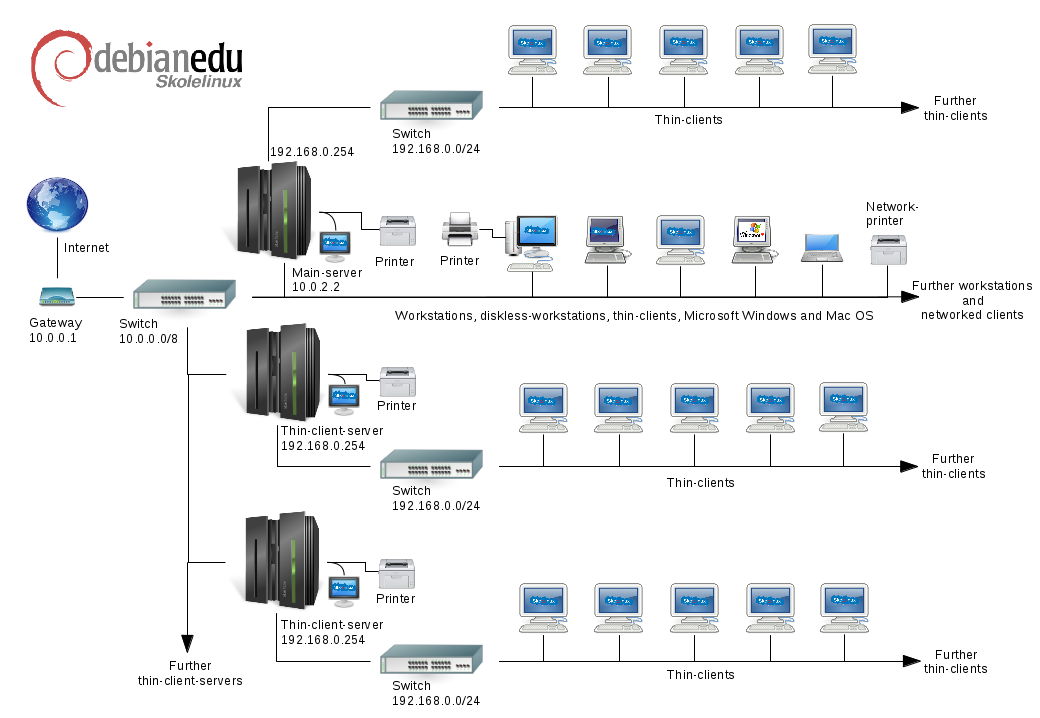 The figure is a sketch of the assumed network topology. The default setup of a Skolelinux network assumes that there is one (and only one) main-server, while allowing the inclusion of both normal workstations and thin-client-servers (with associated thin-clients and/or diskless workstations). The number of workstations can be as large or small as you want (starting from none to a lot). The same goes for the thin-client servers, each of which is on a separate network so that the traffic between the clients and the thin-client server doesn't affect the rest of the network services.

This is designed to be modified - that is, you can have the NFS-root in syslinux point to one of the LTSP servers or change the DHCP next-server option (stored in LDAP) to have clients directly boot via PXE from the terminal server.

By default email is set up for local delivery (i.e. within the school) only, though email delivery to the wider Internet may be set up if the school has a permanent Internet connection. Mailing lists are set up based on the user database, giving each class their own mailing list. Clients are set up to deliver mail to the server (using 'smarthost'), and users can access their personal mail through IMAP.

All the Linux machines that are installed with the Skolelinux installer will be administrable from a central computer, most likely the server. It will be possible to log in to all machines via SSH, and thereby have full access to the machines.

Currently there are two kinds of installation media images: netinstall (CD) and multi-arch USB flash drive. Both images can also be booted from USB sticks.

The aim is to be able to install a server from any type medium once, and install all other clients over the network by booting from the network.