Differences between revisions 3 and 5 (spanning 2 versions) 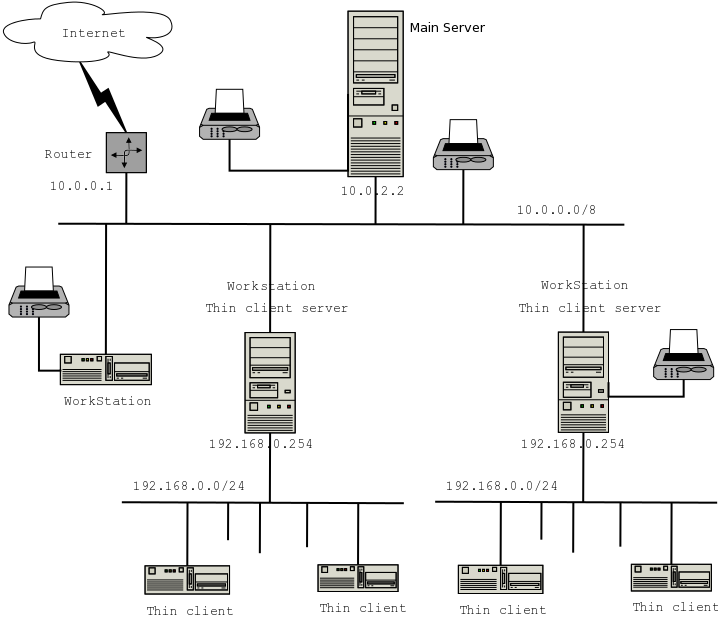 Network configuration on the clients is done automatically using DHCP. Normal clients are allocated IP addresses in the private subnet 10.0.0.0/8, while thin clients are connected to the corresponding thin-client-server via the seperate subnet 192.168.0.0/24 (this to ensure that the network traffic of the thin clients doesn't interfere with the rest of the network services).

FIXME: check if our umask differs from Debians default and possible describe it here. this chapter needs a bit cleanup. The debian default umask is 022, while Debian Edu change this to 002 by adding /usr/share/pam-configs/edu-umask.

FIXME: maybe move to a page of its own or further up.

DHCPD on Tjener serves the 10.0.0.0/8 network, via PXE-Boot you get a syslinux menu where you can choose whether to install a new server/workstation, boot a thinclient or a diskless workstation, memtest, or from local harddisc.

This of course can be modified, ie. you can have the nfs-root in syslinux point to one of the ltspservers or change next-server in DHCP to have clients directly boot via PXE from the terminalserver.

DHCPD on the ltspservers only serves a dedicated 192.168.0.0/24 network on the second interface and is of no interest for this scenario.

This chapter was initially copied and pasted from http://developer.skolelinux.no/arkitektur/arkitektur.html.en ( at that time it was Copyright © 2001, 2002, 2003, 2004 Petter Reinholdtsen < pere@hungry.com >, released under the GPL) and has since then been edited.