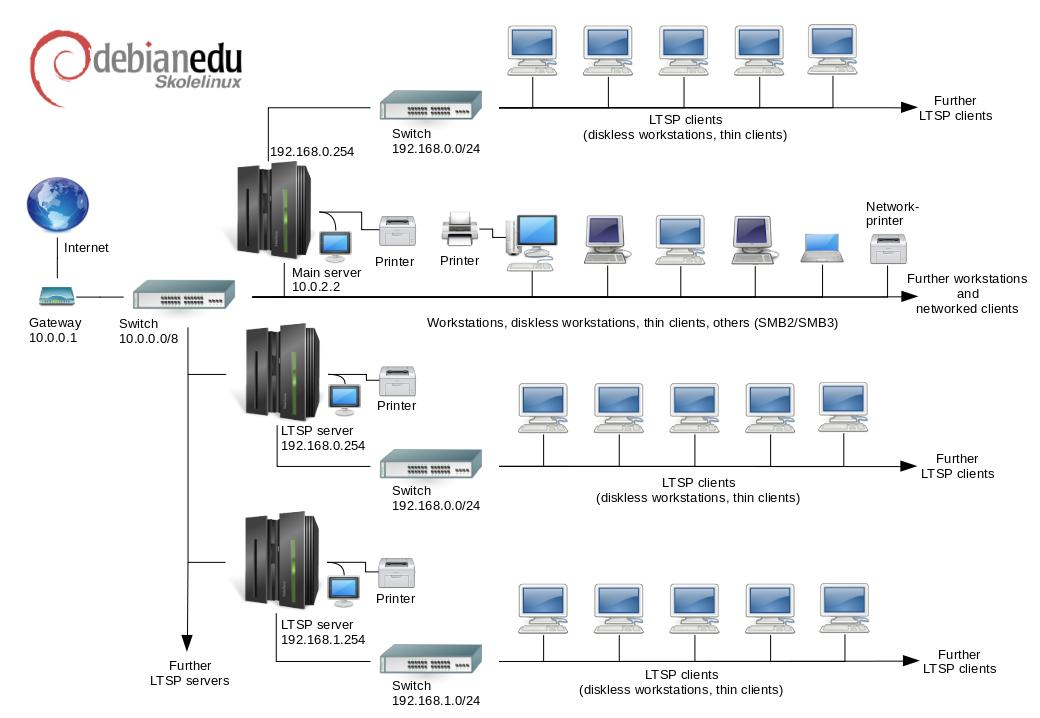 Personal files for each user are stored in their home directories, which are made available by the server. Home directories are accessible from all machines, giving users access to the same files regardless of which machine they are using. The server is operating system agnostic, offering access via NFS for Unix clients and via SMB2/SMB3 for other clients.

Information on users and machines can be changed in one central location, and is made accessible to all computers on the network automatically. To achieve this a centralised directory server is set up. The directory will have information on users, user groups, machines and groups of machines. To avoid user confusion there won't be any difference between file groups and network groups. This implies that groups of machines which are to form network groups will use the same namespace as user groups.

A Skolelinux network can have many LTSP servers, which are installed by selecting the LTSP Server profile.

A thin client setup enables ordinary PCs to function as (X-)terminals. This means that the machine boots directly from the server using PXE without using the local client hard drive. The thin client setup now uses X2Go, because LTSP has dropped support.

Thin clients are a good way to still make use of very old (mostly 32-bit) machines as they effectively run all programs on the LTSP server. This works as follows: the service uses DHCP and TFTP to connect to the network and boot from the network. Next, the file system is mounted from the LTSP server using NFS, and finally the X2Go client is started.

A diskless workstation runs all software on the PC without a locally installed operating system. This means that client machines boot via PXE without running software installed on a local hard drive.

Diskless workstations are an excellent way of using powerful hardware with the same low maintenance cost as with thin clients. Software is administered and maintained on the server with no need for local installed software on the clients. Home directories and system settings are stored on the server too.

The term "networked clients" is used in this manual to refer to both thin clients and diskless workstations, as well as computers running macOS or Windows.

The installation should not ask any questions, with the exception of desired language, location, keyboard and machine profile (Main Server, Workstation, LTSP Server, ...). All other configuration will be set up automatically with reasonable values, to be changed from a central location by the system administrator subsequent to the installation.