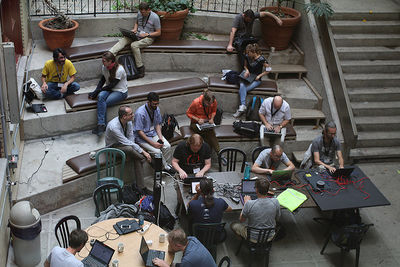 DebCamp is the hacking session right before DebConf.

DebCamp usually occurs in the week before DebConf itself. It's a week for Debian contributors to focus on their Debian related projects, tasks or problems uninterrupted.

DebCamps are largely self-organised, since is for people who would like to do some work. Some prefer to work alone, while some prefer to participate in or organize sprints. Both are great, although we strongly encourage you to plan your DebCamp week in advance either way.

If you're around and looking for something to do, please get in touch with the DebConf organisation team on the #debconf-team IRC channel. You can also find more information under the Volunteers section on the main DebConf wiki page.

The first DebCamp was held at DebConf3 in Oslo and included the DebianInstaller team, ramping d-i development back up for the release of sarge, a large bug squashing effort, and lots of other work by other teams such as the apache maintainers.

The second DebCamp was held at DebConf4 in Brazil and included a large hack lab, the d-i team, Debian-NP, and others.

The third DebCamp was at DebConf5 in Finland and again had a large hacklab, discussions in saunas, and more.

The fourth DebCamp was DebConf6DebCamp. Turns out that only people that were prepared to code without Internet access could do relevant work.

If I recall correctly, the idea for DebCamp came up after DebConf2 in Toronto, which was preceeded by some touring around and canoing and camping for a few of us. I enjoyed that DebConf, the first I attended, but it seemed to me that the best part was not the formal talks, but the the informal discussions and work sessions and just spending time with people in RL. So I mentioned to a few people that maybe a "DebCamp" before the conference would be a good idea. Turned into much more than I expected. --JoeyHess