Most administration tools are written by programmers/admins for admins. They look like LDAP browsers and they are LDAP browsers. What makes CAT different is that it was not written to show an LDAP tree, even if the database is a LDAP server. It was written and rewritten with the goal to make user, group, room, machine administration easy for teachers or others who do not want to spend their lives as network administrators. As well, discussions with teachers helped in designing and implementing CAT to cater for the special needs of administators with non-technical backgrounds.

One of the key concepts of CAT is, let the person who knows the subject do the job. This could be the teacher, but it does not have to be the teacher.

Here is an example from a German university. The local admin does not know who is joining what course (before CAT he spent hours finding that out), and believe it or not, most secretaries of the student administration did not know either. Even the professors did not know -- at least in some cases. The only person who knows the 150 people attending the course is usually the tutor. So, the tutor can log into the CAT module tutoradmin, and add students to the course.

CAT is driven by a role based concept, the idea being that there should be a module for each task, which can then be assigned by the administrator.

CAT version 3.2.8 to 3.2.10 was webmin based frontend called cat-webmin. However, it does not need to remain a webmin application. In fact, the first version was an apache CGI, and it could support any type of GUI, web-based like the French moodle plugins in PHP, or a full-blown desktop application written in low level languages such as C.

CAT version 3.4.0 will be a CGI driven GUI for Apache. Full locale aware and template driven. 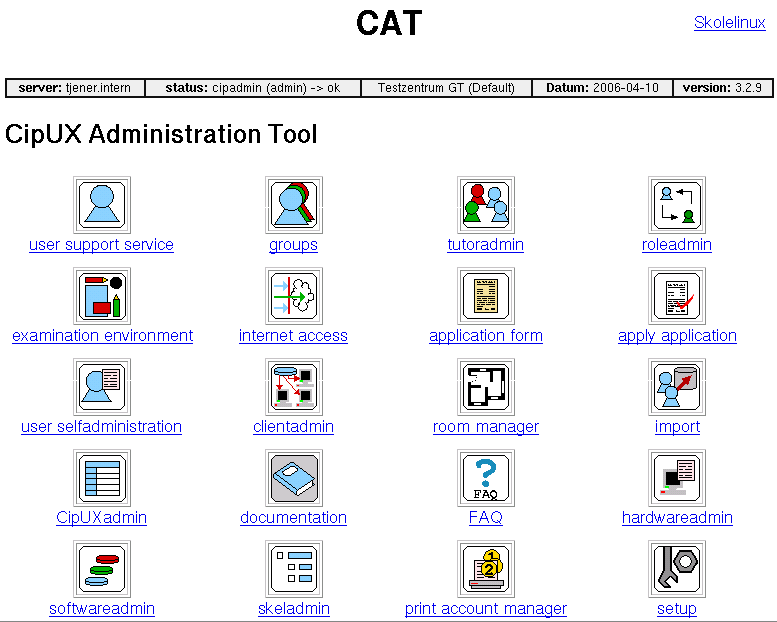 A CAT for Debian-Edu 3.x and Debian Etch using Apache as a webserver and CipUX RPC server as back end for access control.

This CAT for Debian-Edu 2.x and 3.x is written by ?JeanCharlesSiegel in PHP for the French schools and is also called cipuxPHP. It is a moodle plugin an can be accessed via moodle. It uses CipUX-RPC.

A CAT for Debian-Edu 1.x and 2.x using webmin as a webserver and the webmin library for access control, translation and theming. It uses CipUX::CAT.

Today webmin is not a part of Debian, so there is a need to replace CAT-webmin. This section collects some ideas to enhance or continue CAT: